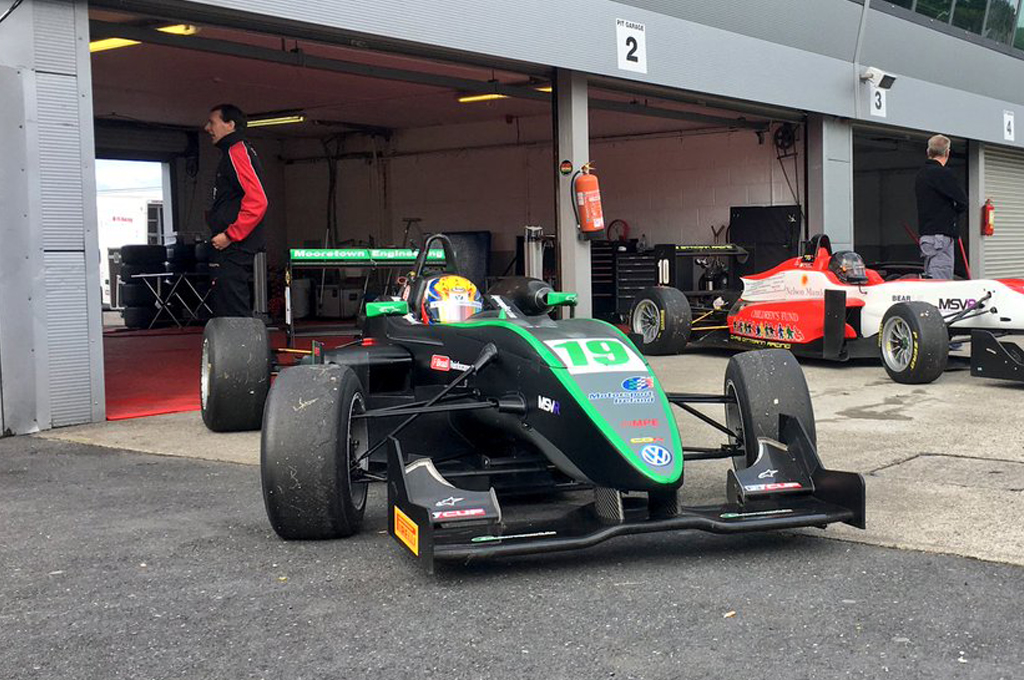 Irish racer Cian Carey claimed a historic victory in the 2017 Leinster Trophy at Mondello Park to put his name beside some of motor racing’s greatest on the silverware. Past winners of the race, which dates back to the 1930s, include Ayrton Senna, Mike Hawthorn, John Watson and Mika Häkkinen.

The entry meant Carey returned to Ireland and the BOSS Series for the first time since winning the 2016 title and stepping up to F3 Cup. His CDR team-mate Gino Ussi also took advantage of the chance for more time behind the wheel to join him in County Kildare.

In qualifying, Carey claimed an impressively dominant pole, 0.7sec clear of his nearest rival, but he had been even more impressive in qualifying for Saturday’s BOSS race. He set a time almost 2.7sec faster than the next best around the 2.1-mile circuit, while Ussi, new to the track, lined up fourth in the opener and third for the main Leinster Trophy race.

Rain disrupted the BOSS encounter but couldn’t stop Carey and Ussi from romping to a one-two finish, well clear in the shortened four-lap race.

The weather eased for Sunday’s Leinster Trophy, but the race began in the worst possible manner for Ussi. A first-lap spin sent him to the back of the field but he eventually recovered to score third and a second podium of the weekend.

Carey, meanwhile, was impressive at the head of the field, defending firmly from the second-placed Paul Dagg. A late safety car gave him a tricky one-lap dash to the flag but he managed the restart perfectly to claim the historic win.

The 23-year-old said: “Sharing my name on a trophy with Ayrton Senna and other F1 greats is something I could not have imagined a few years back. I’m so proud to be a part of this Chris Dittmann Racing team and I thank them for everything they have done for me this season so far. They are an incredible bunch.

“A huge thanks has to go to Motorsport Ireland for having the faith in me last December and selecting me for the Irish Young Driver of the Year award. Without their support none of this would have been possible. Two poles, two wins, and two fastest laps and that historic trophy in my hands made it a weekend I’ll never forget!”

Team owner Chris Dittmann added: “Cian was fantastic all weekend. He had a great race at the front fending off the pressure and it’s always so difficult having a safety car with one lap to go. His restart was incredible and it gave him a huge lead. It’s great for him to win the prestigious Leinster Trophy during the same year as winning Ireland’s Young Driver of the Year award.

“Gino had an action-packed race of his own, but he’ll be delighted with his two podiums. Hopefully we can carry this on to the final F3 Cup round next month and continue to end on a high.”